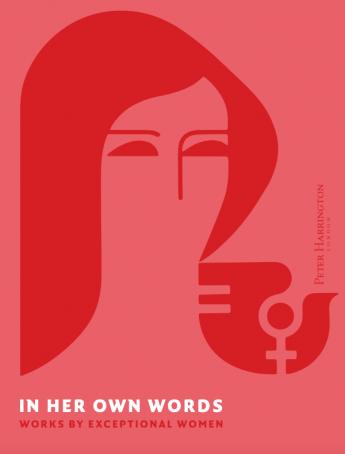 Download
Our first catalogue focussed on women spans the centuries from Sappho to Maya Angelou, showcasing the work of exceptional women in many different fields.
These were women who pushed legal, intellectual, and physical boundaries. Millicent Fawcett Garrett signed our copy of Women’s Victory in July 1928, the same month the Equal Franchise Act gave British women electoral equality with men (item 66). Maria Gaetana Agnesi’s Analytical Institutions is the first advanced mathematics book by a woman (1). Trailblazers such as Fanny Parks, “characterized by remarkable physical stamina” (112), Amelia Edwards, who carried out the first general archaeological survey of Egypt’s ruins (60), and Lady Hester Stanhope, “Queen of the Desert” (144), cleared the way for later intrepid travellers such as Gertrude Bell (21) and Freya Stark (145). The Pinnacle Club Journal, one of our favourite finds, is a scarce survival issued by one of the earliest British womenonly climbing clubs (102).
Several standout presentation copies, inscribed by women to women, attest to the ways they supported and connected with each other: Charlotte Perkins Gilman’s feminist Utopian novel Herland inscribed to Californian suffragette Alice Locke Park, who was instrumental in gaining the vote for Californian women (73); the four lifetime volumes of Susan B. Anthony’s “bible” of the women’s suffrage campaign to her cousin Anna with volume-by-volume commentary (6); two works by Dorothy Parker to the most renowned female screenwriter of the 20th century, Frances Marion (111); the de facto dedication copy of Jacob’s Room, presented by Virginia Woolf to Vanessa Bell (176); and the début novel by Selma Lagerlöf, the first woman to win the Nobel Prize in Literature, to her Danish translators Ida Falbe-Hansen and Elisabeth Grundvig, key to popularising Lagerlöf ’s work in Europe (88).
Some women here are household names: Jane Austen (10 and 11), the Brontë sisters (30 and 31), Agatha Christie (39 and 40), J. K. Rowling (126), and Mary Wollstonecraft (166 and 167).
Others have been overlooked despite brilliant contributions to their fields. Early works by Joan Robinson (122 and 123) and Rosa Luxemburg (96) are well-known to economists, but less well-known are those by Helen Makower (97) and S. F. Porter (118). Rosalind Franklin and Jocelyn Bell were both denied Nobel prizes, despite playing crucial roles in the discovery of the structure of DNA and radio pulsars respectively (70 and 22).
In the suffrage movement, the works of Christabel (109) and Sylvia Pankhurst (110) sit alongside work by their exiled sister, Adela (108), comparatively overlooked, yet no less fierce a Pankhurst for it.
Within the catalogue, works on paper appear alongside items in different media. Amelia Earhart’s Fun of It, inscribed (59), complements the pearl carried on the maiden voyage of the Hindenburg by her contemporary Clara Adams, the first woman to cross the Atlantic as a ticketed passenger (13). A strikingly bound annual of the Pethick-Lawrences’ Votes for Women (113) sits beside the board game Pank-a-Squith (174), a rare hand-painted WSPU donation tin (172), and a Women’s Freedom League sash, once owned by the suffragette Hodgson sisters (171).
So many women have left an inspiring legacy in the world of books through bookselling, publishing, and collecting—such as Sylvia Beach, founder of the legendary Shakespeare and Company (19); Frances Mary Currer Richardson, the first major female book collector (48); and Belle da Costa Greene, the African American librarian who shaped the Pierpont Morgan library (77).
We hope that this catalogue, and the continuing growth of our stock in this area, will encourage collectors to discover or appreciate anew these remarkable women and their works.
Please direct all enquiries to:
Theodora Robinson (theodora@peterharrington.co.uk)
Emma Walshe (emmawalshe@peterharrington.co.uk)