Pavel Chepyzhov is the owner of a rare book business in Moscow and in Georgia's capital Tbilisi. He is also member of the ILAB Executive Committee and shares some information about his country and the book trade in Russia. 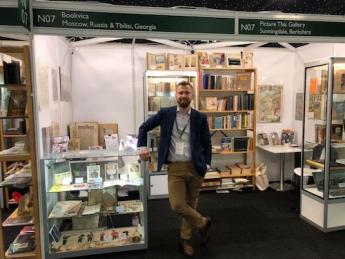 Pavel, you are dealing in Russian Literature, Art, Science, Travel etc and you run two bookshops; one store in Moscow and one in the Georgian capital Tbilisi. How did you enter the world of antiquarian books?

I have been in the business from very early on in life - through the university I was working at an auction house in Moscow at the department of rare books and manuscripts and at 21 I became the head of the department. My major was in antiquarian books and history of book in the University of Printing Arts in Moscow, so at the same time I have received the important theoretical knowledge as well as the practical knowledge about the market, the valuation of the books etc. Than at 23 I went to Australia for the internship organised by my university and the International League of Antiquarian Booksellers, to learn from the best antiquarian booksellers in the country. I have spent fantastic time in Sydney and Canberra, working at the Sydney Antiquarian Book Fair and Hong Antiquarian Book Fair. With that background, I found it quite appropriate to start on my own soon upon the return to Russia.

You are exhibiting at various international book fairs, such as London, New York or Hong Kong. How would you describe the collector's market of Russian material? Has it changed much over the past two decades?

The thing I like the most about dealing mostly in Russian and Slavonic material is that the market is very diverse. The collectors for these books are very different, they live around the world, and the purposes vary. That is happening, because the repertoire of rare Russian books is very wide - from Old-Slavonic early imprints to the liver d'artiste of 1940-50s, the market of Russian books have its own laws and tendencies. The biggest tendencies of the past years that the autographed material and signed editions are on the rise, as well as the market of the highly visual avant-garde rarities. That is happening because these items are so rare and unique, the market always in need of the quality material. That's also why the Slavonic imprints of XVI-XVII centuries are in high demand now as well: in Soviet times in Russia they were less liked because all of them are religious texts, but now the collectors have realised that it's not about the textual significance, the artifactual value of these codexes are hard to deny, even though they are printed in Church Slavonic, that is harder to read.

Our collector base is quite wide: we have customers in places like Vladivostok or Hawaii, but the majority of Russian collectors are still in Moscow. When it's been said that the old collector generation is passing and new one is not coming, I can not agree with it: when I look at the age percentage of our clients, it's (again) quite diverse, but many participants in their 30-50s. I think it's important for such old-fashioned area as rare bookselling to use all of the advantages of the web market in 2018, be up-to-date with tech, and that usually results in having the younger clientele.

It's a big responsibility to be a rare book expert, as the booksellers we need to be as professional as possible, and it's achieved with the help of professional organisations like GAK and ILAB. It's important that we as a community work together on the issues that our trade is facing and set the rules: it's appreciated by the clients and by all the members involved. Nowadays the rare book market is truly international so I think ILAB itself is a very important tool of bringing booksellers closer together and closer to the golden standards of the trade.

I remember I truly realised the role of the League, when I was visiting one of my first International fairs at Olympia in London, and I felt so secure that every book I pick at the fair would be properly described, with good provenance, I would be given a trade discount and time to pay if I decide to buy it, and if there's any problem, it could be returned. This feeling of being safe and generally welcomed is stimulates the trade and the market in general, making collectors and dealers buy books. The same process at any unknown online auction would be shadowed by uncertainty.

I am very honoured to be included in the Executive Committee of the International League of Antiquarian Booksellers (ILAB). There's a lot to learn from the highly experienced colleagues on the Committee, and I hope to contribute as well.

Last but not least, for me our community is almost like a big international family, the last holiday I had I spent with couple of my friends, ILAB affiliates in Tibet tracking to the Advance Base Camp of Mt.Everest.

What are your current projects, what are you trying to achieve in the next years as an antiquarian bookseller?

Since we have a bookshop in Georgia we are dealing not only in Russian books, but also in Georgian, Armenian, Serbian, Ukrainian, Japanese and Arabic. For now our aim is to build up a rare book firm that deals in the important books in the languages that are less represented in the international book trade. It's an interesting though challenging niche, but the process is very exciting. We have produced a catalogue for the California fair in 2018, that was called 'The East Awakens' and consisted of the travel books in Russian, Japanese and Arabic. We have received a very positive feedback, and was called 'the alternative rare bookshop', which was the best praise to hear. I think it's only logical when we are coming from such an alternative place as Russia to try to show people on the international market, what is the different approach to the world history could be seen through the rare books.

We also are doing our bit in putting Georgia on the map, as we are preparing the bibliography of Georgian Constructivist books of 1920-1930s, that supports the collection we put together over the years. The book is to come out this year and will be supported by the lectures and exhibitions in Europe, USA and Russia.

The world's eyes are on Russia this summer: If travelling to your country, what should be added to a bibliophile's itinerary and reading list?

There's plenty of Russian literature that is lesser known in the West among the readers, so if you are going to Russia why not research some of our brilliant but not so famous authors. Why not read Bunin instead of Tolstoy or 'White Guard' by Bulgakov instead of his 'Master of Margarita'?

If you happen to go to Russia this year for the World Cup or other reason, I always recommend checking out the Museum of the Book at the Russian State Library and Saint-Petersburg has the best second-hand bookshops in the country.

Your prediction for the final and where will you most likely spend that day?

I think it should be England against France. I plan to watch in Moscow with my friends.

Pavel, thank you very much for the interview!
Interview: Angelika Elstner

Education
CABS-Minnesota Goes Virtual for 2021 & Registrations are now open!
After a one-year, pandemic-inspired hiatus, CABS-Minnesota (formerly the Colorado Antiquarian Book Seminar) is back — this time in virtual format —…
Plus