In 1947 representatives from five countries, Denmark, France, Great Britain, the Netherlands, and Sweden, met in Amsterdam to discuss the formation of an International League of Antiquarian Booksellers (ILAB), with the aim of establishing new hope for international peace through open markets, to foster friendship and understanding, and to counteract the animosity and suspicion engendered by World War II. ILAB was formally incorporated in Copenhagen in September 1948.

This page is under construction. 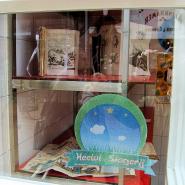 The ILAB was formally incorporated in Copenhagen in September 1948, with ten participating countries. 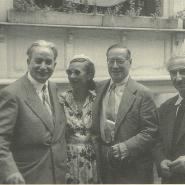 During the first years the ILAB Committee Meetings were held in Switzerland, most of the time at the President’s office. 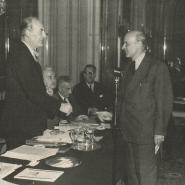 After a series of successful conferences, the ILAB adopted its logo, slogan and Code of Customs to which all bookseller members adhere. 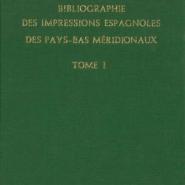 The admission of Japan, the ILAB Bibliography Prize (now the Breslauer Prize) and the first ILAB Book Fair were the milestones of the 60s. 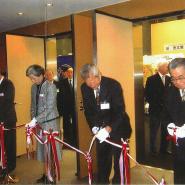 Expanding to the Global Market : During the 30th ILAB Congress and the 13th International Book Fair in Tokyo 1990 the Antiquarian Booksellers'… 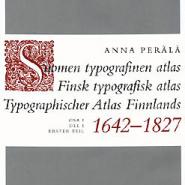 The beginning of the 21st century saw the first woman at the head of the League: Australian bookseller Kay Craddock was elected ILAB President during… 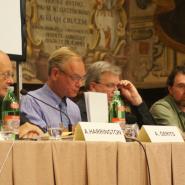 This page will list all Past Presidents and Presidents of Honour of the League. (Page under construction!)

This is the article excerpt. If it's not set, then the article lead will be used. The ILAB was formally incorporated in Copenhagen in September 1948, with ten participating countries. Representatives from Belgium, Finland, Switzerland, and Italy joined their colleagues from Great Britain, France, Sweden, Denmark and The Netherlands at the conference table. Denmark was holding a proxy for Norway. Menno Hertzberger proposed William S. Kundig as ILAB’s first president. Kundig, “a man with authority, position, and money ... a good host and a first-class raconteur” (Kaye) was unanimously elected. The first ILAB Committee consisted of William S. Kundig (President), Percy H. Muir (Vice-President), Menno Hertzberger, Einar Grønholt-Pedersen, André Poursin.
Click to read this article

Considering the dubiety with which our activities were treated it is pleasant to record that the Congresses in London in 1949 and in Paris in 1950 were very successful both socially and professionally, while the standard of hospitality in both cities was impeccable.

The admission of Japan, the ILAB Bibliography Prize (now ILAB Breslauer Prize for Bibliography) and the first ILAB International Antiquarian Book Fair were the milestones of the 60s.

Georges A. Deny from Brussels was ILAB President from 1960 to 1965 and the first Secretary of the ILAB Breslauer Prize for Bibliography who laid down the ground rules. The Prize is awarded every fourth year to the author of the most original and outstanding study in bibliography. Deny supervised the first and second awards to Jean Peeters-Fontainas “Bibliographie des impressions Espagnoles aux Pays-Bas méridonaux” in 1967.

Expanding to the Global Market

During the 30th ILAB Congress and the 13th International Book Fair in Tokyo 1990 the Antiquarian Booksellers' Association of Korea (ABAK) were elected as the 18th ILAB member. Two years later Czech booksellers formed the Svaz Antikváru CR (SACR which joined the League during the 32nd ILAB Congress in Amsterdam in 1994. The Spanish Asociación Ibéria de Librerias Anticuarias (AILA), founded in 1990, also joined ILAB.

The beginning of the 21st century saw the first woman at the head of the League: Australian bookseller Kay Craddock was elected ILAB President during the Congress and the International Antiquarian Book Fair in Edinburgh 2000. Craddock, meanwhile ILAB President of Honour, was succeeded by Bob Fleck from 2002 to 2006, and Michael Steinbach 2006 from to 2008.

After the Boston Presidents' Meeting in 2001, the Danish, Swedish, Finnish and Norwegian associations organized a very special event: The 36th Congress and 19th International Antiquarian Book Fair took place in four countries, with a sea journey in between. On this occasion the 13th ILAB Bibliographical Prize of $10,000 was awarded to Anna Perälä, for her atlas of Finnish typography, 1642-1827, a monumental two volume work, published in Finnish, Swedish and German. Kay Craddock presented the award to Anna Perälä at a dinner in Helsinki.

In 2003 the Presidents travelled to Potsdam for their annual meeting, only a year later the ILAB affiliates met for a Congress and a Book Fair in Melbourne, well organized by the Australian and New Zealand Association of Antiquarian Booksellers (ANZAAB).

This page will list all Past Presidents and Presidents of Honour of the League.